- Revenue was $187.0 million, compared with guidance of approximately $200 million;
- Gross margin of 10.1% was in-line with guidance, compared with 16.5% in Q2 2016 and 16.1% in Q3 2015;
- Net loss was $20.5 million, compared with net income of $5.5 million in Q2 2016 and $8.6 million in Q3 2015;
- Total external module shipments were 191.2MW while module shipments to the Company's downstream projects were approximately 6.1MW;
- Total external wafer shipments were 290.5MW compared with 423.3MW in Q2 2016 and 341.6MW in Q3 2015;
- Successfully sold two utility-scale projects in Japan with total capacity of 2.5MW and rooftop projects in China with aggregate capacity of 1.3MW;
- Recognized revenue of $27.8 million from the sale of four utility-scale projects in UK with capacity of approximately 20MW;
- The Company now has a solar power project pipeline of over 1GW, of which 448MW are projects that are "shovel-ready"; and
- LED sales decreased by 8.9% compared to Q2 2016 with gross margin of approximately 30%
Mr. Xianshou Li, ReneSola's Chief Executive Officer, commented, "Third quarter financial results fell short of expectations, as weak demand led to reduced shipments and significant pricing pressure. While we tackled prevailing market challenges through expense control, we reported our first loss after four consecutive profitable quarters. Nonetheless, we executed on key elements of our strategy. We expanded our downstream project pipeline to over 1GW, of which over half are late-stage and we plan to monetize them in the next one to two years. We also paid down short-term debt during the quarter, which demonstrates our commitment and ability to improve our balance sheet."
Li continued, "Looking forward, we anticipate the solar industry headwinds to continue into 2017. As we navigate challenging market conditions, we intend to remain fully focused on project development with rapid monetization, expansion through technology improvements, and streamlined operations with prudent cost control."
Third Quarter 2016 Financial Results
Revenue of $187.0 million was down 25.2% q/q and down 49.2% y/y. Revenue declined due to lower blended ASP and reduced product shipments to external customers due to decreased market demand. The Company remains committed to using the solar products business as a foundation to drive growth through downstream project development.
Gross profit of $18.9 million was down 54.2% q/q and down 68.2% y/y. Gross margin decreased to 10.1% from 16.5% in Q2 2016 and from 16.1% in Q3 2015. The sequential margin decline was primarily due to lower wafer and module ASPs, as well as an increase in polysilicon cost.
Operating expenses of $30.7 million were down 11.6% q/q and down 35.9% y/y. The decrease in operating expenses reflects efficient expense control. Sequentially, SG&A expense decreased by 16.5% and R&D expense decreased by 15.0%.
Operating loss was $11.9 million, compared to operating income of $6.4 million in Q2 of 2016 and $11.4 million in Q3 of 2015.
Non-operating expenses of $10.6 million include net interest expense of $7.7 million and foreign exchange loss of $3.3 million, partially offset by gains on derivatives of $0.3 million.
Net loss was $20.5 million, compared to a net income of $5.5 million in Q2 of 2016 and $8.6 million in Q3 of 2015. Loss per ADS were $0.20, compared to earnings per ADS $0.05 in Q2 of 2016.
Balance Sheet, Liquidity and Capital Resources
The Company had cash and cash equivalents (including restricted cash) of $139.4 million as of September 30, 2016, compared with $163.4 million at the end of Q2 2016. The decrease of $24.0 million is mainly due to the repayment of our fully pledged loan. Total debt was $699.0 million, down from $716.5 million as of June 30, 2016. Total debt decreased by $17.5 million in the quarter.
Third Quarter Operating Highlights
The Company focused on developing, operating and selling high-quality solar power projects. Activities are centered on building a pipeline of distributed generation and utility-scale projects in attractive geographies worldwide.
Project Sales
In the third quarter, the Company recognized revenue from four utility-scale projects in the United Kingdom sold in the second quarter. These projects had approximately 20.0MW of generating capacity. Additionally, the Company sold two utility-scale projects in Japan with a total capacity of 2.5MW and rooftop projects of 1.3MW in the domestic Chinese market in the third quarter.

As announced in early November, the Company signed agreements to sell six utility-scale projects in the United Kingdom to a European buyer. These projects have a combined capacity of approximately 26MW. Revenue from the sales of these projects is expected to be recognized in the fourth quarter of 2016.
Project Pipeline
The Company currently has a pipeline of over 1GW of projects in various stages, of which 448MW are projects that are "shovel-ready". The shovel-ready projects include (i) projects that are overseas and that Renesola has the legal right to develop based on definitive agreements, and (ii) projects in China that have been filed with National Development and Reform Commission. The Company identified a number of opportunities in China's domestic distributed generation market, and now has 187.3MW of such projects which are in shovel-ready stage in its pipeline. The Company continues to focus on developed markets which are expected to have stable returns and healthy cash flow.
The geographic distribution of our shovel-ready projects pipeline is outlined in the table below. 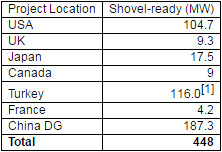 [1] With the start of operation, the projects will be transferred into a joint venture, in which Renesola is expected to hold 50% of equity interest of the 116MW projects.
Modules and Wafers
The Company supplies high quality products at low cost to select customers. The Company considers its competitive advantages to be improving conversion efficiency and supply chain management.
During the third quarter, total external module shipments were 191.2MW, down 32.3% from the second quarter of 2016 and down 52.9% from the third quarter of 2015. Total wafer shipments were 290.5MW, down 31.4% from the second quarter of 2016 and down 15.0% from the third quarter of 2015. The reduction in shipments reflected softened demand in the domestic market, as project completions were pulled into the first half in order to qualify for higher FiT.
LED
LED revenue of $7.1 million was down 8.9% from $7.8 million in Q2 2016. Gross margin was approximately 30%. The decline in revenue reflects the temporary slowdown attributable to Ramadan and the summer holidays in Europe.
Despite the sequential revenue decline, ReneSola is optimistic about the growth prospects in LED business. The market for energy efficient products is large and growing rapidly. LED lighting is one of the most effective products for reducing electricity consumption. The Company believes it can leverage its brand name and global distribution footprint to build an attractive, high margin business. The Company expects LED business to grow into a meaningful financial contributor in the years ahead.
Outlook
For the fourth quarter, the Company expects revenue in the range of $220 million and $240 million and gross margin in the high-single digits. The outlook reflects reduced shipments due to weak domestic demand, high polysilicon prices, and declining wafer prices.
source: ReneSola
Profili di ENF per aziende sudette in questo articolo