Sunworks, Inc. announced financial results for the second quarter and six months ended June 30, 2017.
Q2 2017 Summary:
- Revenue of $25.0 million, a decrease of 19.3% compared to the record $31.0 million recorded in the year-ago quarter and a sequential increase of 73.6% versus the $14.4 in the first quarter of 2017.
- Gross margin of 26.9% compared to 29.4% in the year-ago quarter and 19.4% in the first quarter of 2017.
- Net income of $1.1 million compared to net income of $0.7 million in the year-ago quarter and a net loss of $2.9 million in the first quarter of 2017.
- Backlog of $58.2 million compared to $59.8 million at March 31, 2017 and $43.8 million at June 30, 2016.
Chuck Cargile, Sunworks Chief Executive Officer said, "We executed well in the second quarter to achieve our near-term objective of returning Sunworks to profitability. Our revenue and gross margins improved sequentially and we reduced our operating expenses while strengthening our back-office systems and internal controls. As a result, we generated a 43.5% year-over-year increase in net income on a lower base of revenue, demonstrating the earnings power of Sunworks. Today, we have a stable platform for profitable growth firmly in place. Our backlog for scheduled installations remains strong and our pipeline for new sales is robust, giving us confidence for even greater profitability in the second half of this year. We are intensely focused on driving higher revenue and profitability to significantly increase shareholder value."
"The second quarter last year represented a record level of revenue for Sunworks, more than 60% above previous records," added Mr. Cargile. "The $25 million reported in the second quarter this year is the second-highest revenue level in our history, and we are confident we have the backlog and demand to support sustainable and profitable growth going forward."
As of June 30, 2017, the company's cash balance was $4.2 million and total debt outstanding (including convertible debt) was $2.2 million. 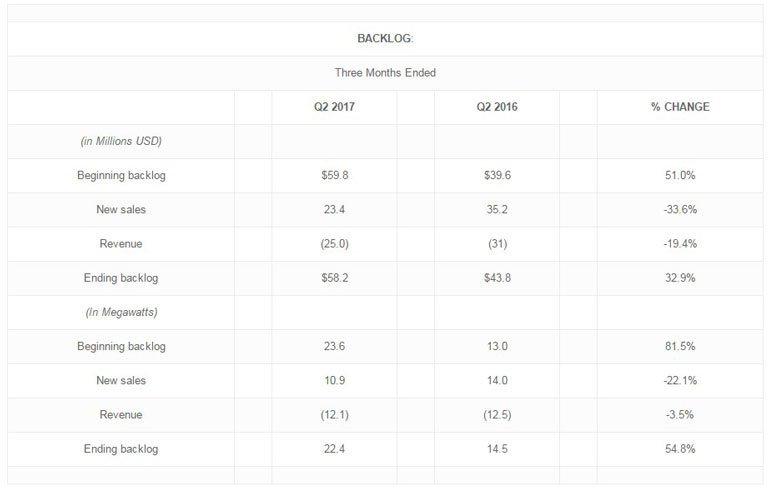 Adjusted Earnings Before Interest, Taxes, Depreciation and Amortization (EBITDA):
Adjusted EBITDA is a supplemental non-GAAP financial measure that the Company believes is an important measure of operating performance.
The following is a non-GAAP measure of cash flow, or adjusted EBITDA, which adds back non-cash items including interest, taxes, stock based compensation and depreciation and amortization. 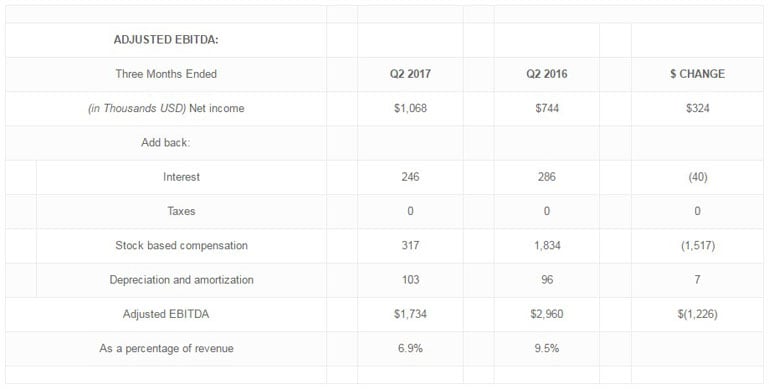