Project Pipeline
As of March 20, 2017, the Company had a pipeline of over 1GW of projects in various stages, of which 707MW were projects that are "shovel-ready". The shovel-ready projects include (i) projects that are overseas and that Renesola has the legal right to develop based on definitive agreements, and (ii) projects in China that have been filed with National Development and Reform Commission. The Company identified a number of opportunities in China's domestic distributed generation market, and now has 391.9MW of such projects in the shovel-ready stage in its pipeline. The Company continues to focus on developed markets which are expected to have stable returns and healthy cash flow.
The following table sets forth our shovel-ready projects pipeline by location: 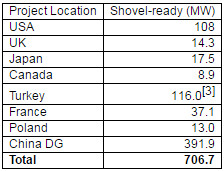 [3] With the start of operation, the projects will be transferred into a joint venture, in which Renesola is expected to hold 50% of equity interest of the 116MW of projects.
As the Company announced earlier in March, it currently has over 330MW project pipelines under construction and plans to construct over 550MW of projects in 2017. During the construction phase, the projects will be financed by construction loans, as well as installment payments from buyers.
Modules and Wafers
During the fourth quarter, total external module shipments were 330.7MW, up 72.9% from Q3 2016 and down 11.4% from Q4 2015. Total wafer shipments were 305.9MW, up 5.3% from Q3 2016 and up 13.2% from Q4 2015. The sequential uptick in both module and wafer shipments reflected higher demand in the domestic market.
LED
LED revenue of $9.3 million was up 30.8% from $7.1 million in Q3 2016. Gross margin was 25.6%. The increase in revenue reflected growth from newly established relationships with sales agents in certain regions.
ReneSola remains optimistic about the growth prospects for its LED business. The market for energy efficient products is large and growing rapidly. LED lighting is one of the most effective products for reducing electricity consumption. The Company believes it can leverage its brand name and global distribution footprint to build an attractive, high margin business. The Company expects the LED business to grow into a meaningful financial contributor in the years ahead.
UK and Germany Anti-dumping and Countervailing Duty Update
The Company's subsidiary in the United Kingdom (UK), ReneSola UK Ltd., has received a decision and subsequently a post-clearance duty demand note from Her Majesty's Revenue and Customs (HMRC) of the UK Government, which requires ReneSola to pay retrospective anti-dumping duty (ADD), countervailing duty (CVD) and value added tax of approximately £1.2 million (US$1.7 million) in total associated with certain imports of solar panels from Renesola Singapore PTE and Enfield Solar Energy Ltd India between December 2013 and February 2014. UK Customs disagreed with the Company's declared country of origin of these products. The Company is contesting the determination and has requested a review before HMRC. The final review decision of HMRC is expected to be announced in April or May 2017. The Company expects to appeal any adverse decision to the competent customs tribunal in the UK.
The Company's subsidiary in Germany, Renesola Deutschland GmbH, has received a post-clearance duty demand note from Dutch Customs, which requires ReneSola Deutschland GmbH to pay retrospective ADD and CVD of approximately €11.8 million (US$13.1 million) in total associated with certain imports of solar panels from its various Indian OEM suppliers in late 2013 and early 2014. Dutch Customs disagreed with the Company's declared country of origin of these imported products, and the Company has filed an administrative appeal with Dutch Customs and expects to receive a final decision by the end of April 2017. If Dutch Customs dismisses the appeal, Renesola Deutschland GmbH expects to ask for a judicial review by lodging a judicial appeal before the Dutch Court.
The Company is vigorously contesting these claims, and it is currently unable to estimate the possibility of success or loss from its requests for review and/or appeal. The general statute of limitations to collect arrears of custom duties expires after three year from the date on which an import declaration was filed provided that no deliberate customs fraud possibly leading to criminal liability has been committed. As such and since the Company has not received any additional claims up to the date of this announcement, the Company's products imported into the European Union before March 28, 2014 should not be subject to further duty demand by relevant customs. Moreover, the Company has fully exited from using OEMs from India, and made no further shipments to the European Union since the termination of its undertaking agreement to sell PV products at or above the Minimum Import Price in June 2015. However, any unfavorable outcome from these actions and disputes, including appeal of the outcome in these actions or disputes, may have a material adverse effect on the Company's financial position, results of operations or resources in the future.
Outlook
For Q1 2017, the Company expects revenue in the range of $130 to $150 million, external wafer shipments in the range of 240MW to 260MW and external module shipments in the range of 250MW to 260MW.
For full year 2017, the Company expects revenue in the range of $900 million to $1,000 million.
source: ReneSola
Profili di ENF per aziende sudette in questo articolo