Sky Solar Holdings, Ltd. today announced its financial results for the third quarter of 2015.
Highlights:
- Q3 2015 total revenue of $12.1 million, up 17.3% over Q3 2014
- Q3 2015 electricity revenue of $11.3 million, up 63.6% over Q3 2014
- Q3 2015 Adjusted EBITDA1 of $3.8 million, compared to $1.6 million in Q3 2014
- 117.5MW of IPP assets in operation as of September 30, 2015, compared to 93.2MW as of June 30, 2015
- As of September 30, 2015, 36.0MW under construction, 242.4MW of shovel-ready projects, and 1.0 GW of solar parks in pipeline, including 103.3MW of IPP assets in Latin America close to breaking ground
Mr. Weili Su, founder, chairman and chief executive officer of Sky Solar, commented, "We are pleased to report our financial results for the third quarter of 2015, as strong electricity sales drove both top- and bottom-line growth. Electricity sales were up 63.6% year over year as a result of connecting 24.3MW of additional electricity generating capacity during the quarter, which includes our first 8.0MW solar park in Uruguay."
Mr Su continued, "We also continue to make great strides in securing financing to advance the development of our pipeline globally. In early September, we announced a new agreement with our existing partner in Japan, which will invest an additional JPY4 billion (US$33 million), reaching a total JPY8.93 billion (US$72 million) investment into our partnership. Additionally, we announced our new partnership with Hudson Clean Energy to fund solar project development in Latin America and Japan with a planned total investment of up to US$100 million. Our proven execution in building out our pipeline, ability to secure attractive financing options, and our keen focus on identifying high-return projects gives us great confidence in our growth prospects for the remainder of the year as we head into 2016."
Mr Sanjay Shrestha, Chief Investment Officer of Sky Solar, and President of Sky Capital commented, "We continue to remain disciplined in our capital allocation by targeting key solar markets globally; particularly Japan, Latin America and the US. Our current partnerships greatly strengthen our expansive reach and capabilities to develop new projects in our most promising geographies going forward. We have also begun the process to leverage existing synergies among our global teams to further expedite our project development and financing capabilities. We expect these initiatives to deliver a positive impact on our operational results in 2016."
Third Quarter 2015 Financial Results
Net revenue was $12.1 million, up 17.3% from $10.3 million in the same period in 2014. Revenue from electricity generation was $11.3 million, up 63.6% from $6.9 million in the same period in 2014, while revenue from solar energy system and other sales was $0.8 million, down 77.1% from $3.4 million in the same period in 2014.
The year-over-year growth in electricity sales was primarily due to the increase in the Company's operational IPP assets globally. The electricity sales remained flat compared to the second quarter in 2015, as the majority of IPP assets connected during the third quarter only began to contribute to revenue in the fourth quarter of this year.
The year-over-year and sequential decline in revenue from system sales and other sales was primarily due to a decrease in EPC revenue across all of the Company's major geographic markets as the Company continued to shift its business model towards IPP revenue.
The following table shows the Company's sequential and year-over-year change in revenue for each segment, geographic region and period indicated. 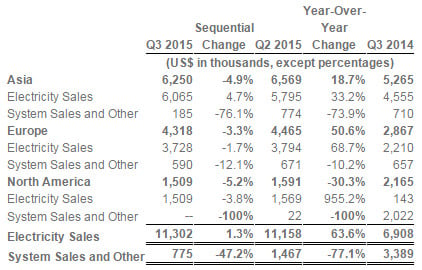 Cost of sales and services was $3.6 million, compared to $5.4 million in the same period in 2014. The decrease was a result of electricity sales representing a greater portion of the Company's sales mix during the quarter, as selling costs for electricity sales are typically lower when compared with selling costs for systems and other sales.
As a result of the above, gross profit was $8.5 million, up 71.4% from $5.0 million in the same period in 2014. Gross margin increased to 70.0% from 47.9% in the same period in 2014.
During the third quarter of 2015, an impairment loss of $732 thousand was recorded, while no such loss was recorded in the same period of 2014. The impairment loss was a result of discontinued licenses in Canada due to certain project timing and technical issues.
Selling, general and administrative ("SG&A") expenses were $6.3 million, up 28.4% from $4.9 million in the same period in 2014. The increase was primarily due to continued investment to support Sky Solar's growth initiatives in key markets, such as Japan, South America and North America.
Other operating income was $38.0 thousand, compared to $4.5 million in the same period of 2014. The decrease in other operating income was a disposal of IPP solar parks in the third quarter of 2014. No such disposal was recorded in the third quarter of 2015.
As a result of the above, operating profit was $1.4 million, compared to $4.5 million in the same period in 2014.
Finance costs were $1.1 million, compared to $0.4 million in the same period of 2014. The increase in finance costs was primarily due to the increase in loans borrowed from project financing.
Other non-operating expenses of $4.1 million mainly represented losses of $3.1 million associated with Japan Silent Partnership including fair value fluctuation of financial liabilities. This compares to non-operating expenses of $7.1 million in the same period of 2014. The decrease in other non-operating expenses was primarily due to $5 million in foreign exchange losses associated with the depreciation of the Euro in the third quarter of 2014 which impacted the Company's subsidiary's Euro-denominated loans.
As a result of the above, Net loss was $5.6 million, compared to a net loss of $3.6 million in the same period in 2014.
Basic and diluted loss per share remained at $0.01 compared to the same period in 2014. Basic loss per ADS were $0.12 and diluted loss per ADS were $0.11, compared to basic and diluted loss per ADS of $0.09 in the same period in 2014.
Adjusted EBITDA was $3.8 million, compared to $1.6 million in the same period in 2014.
Pipeline Analysis
As of September 30, 2015, the Company owned and operated 117.5MW of IPP assets, compared to 93.2MW as of June 30, 2015.
The Company had 36.0MW of projects under construction at the end of the quarter, compared to 26.9MW under construction as of June 30, 2015. All of the 36.0MW of projects under construction are located in Japan.
In total, the Company had 1.3 GW of projects in various stages of development, which includes the projects under construction described above as well as 242.4MW of shovel-ready projects and more than 1.0 GW of projects in pipeline. This includes 103.3MW of IPP assets in Latin America close to breaking ground.
Balance Sheet and Liquidity
As of September 30, 2015, the Company had cash and cash equivalents of $50.8 million, trade receivables of $32.1 million and solar park assets of $241.4 million. Total borrowing was $85.8 million, including $11.4 million of borrowing due within one year.
Recent Developments
Sky Solar continued to strengthen its senior management team through the addition of two key recent hires.
Aditya Satghare joined Sky Capital as Vice President, Finance and Corporate Strategy and brings 14 years of financial industry experience, including 10 years of renewable energy experience to further strengthen Sky Solar's global financing capabilities.
Armin Seifart joined Sky Solar as Vice President and Corporate Counsel, and brings over 20 years of experience in international corporate transactions, project finance, M&A in Power and Oil & Gas industries and will add significant capabilities in project & business development in Latin America, US and general US corporate securities and compliance matters.
Use of Non-IFRS Measures
To provide investors with additional information regarding the Company's financial results, the Company has disclosed Adjusted EBITDA, a non-IFRS financial measure, below. The Company presents this non-IFRS financial measure because it is used by the Company's management to evaluate its operating performance. The Company also believes that this non-IFRS financial measure provides useful information to investors and others in understanding and evaluating the Company's consolidated results of operations in the same manner as the Company's management and in comparing financial results across accounting periods and to those of its peers.
Adjusted EBITDA, as the Company presents it, represents profit or loss for the period before taxes, depreciation and amortization, adjusted to eliminate the impact of share-based compensation expenses, interest expenses, impairment losses, IPO expenses charges of fair value changes of financial liabilities and reversal of tax provision.
The use of Adjusted EBITDA has limitations as an analytical tool, and you should not consider it in isolation or as a substitute for analysis of the Company's financial results as reported under IFRS. Some of these limitations are: (a) although depreciation and amortization are non-cash charges, the assets being depreciated and amortized may have to be replaced in the future, and Adjusted EBITDA does not reflect cash capital expenditure requirements for such replacements or for new capital expenditure requirements; (b) Adjusted EBITDA does not reflect changes in, or cash requirements for, the Company's working capital needs; (c) Adjusted EBITDA does not reflect the potentially dilutive impact of equity-based compensation; (d) Adjusted EBITDA does not reflect tax payments that may represent a reduction in cash available to the Company; and (e) other companies, including companies in the Company's industry, may calculate Adjusted EBITDA or similarly titled measures differently, which reduces their usefulness as a comparative measure. Because of these and other limitations, you should consider Adjusted EBITDA alongside the Company's IFRS-based financial performance measures, such as profit (loss) for the period and the Company's other IFRS financial results.
The following table presents a reconciliation of Adjusted EBITDA to profit (loss) for the period, the most directly comparable IFRS measure, for each of the periods indicated: 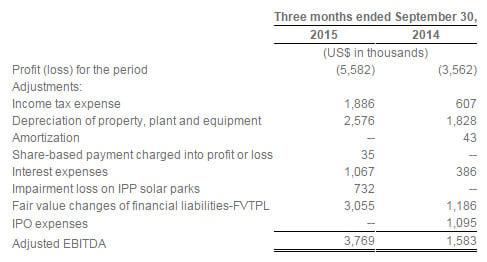 The Company does not consider historical Adjusted EBITDA to be representative of future Adjusted EBITDA, as the Company's revenue model changed from primarily generating revenue from selling solar energy systems to primarily generating revenue from selling electricity in the fourth quarter of 2013 and the Company continues to shift its business towards IPP revenue. The Company believes that Adjusted EBITDA is an important measure for evaluating the results of its IPP business.
These measures are not intended to represent or substitute numbers as measured under IFRS. The submission of non-IFRS numbers is voluntary and should be reviewed together with IFRS results.
Project Capacities
Unless specifically indicated or the context otherwise requires, megawatt capacity values in this earnings release refer to the attributable capacity of a solar park. We calculate the attributable capacity of a solar park by multiplying the percentage of our equity ownership in the solar park by the total capacity of the solar park.
source: Sky Solar Holdings
Profili di ENF per aziende sudette in questo articolo